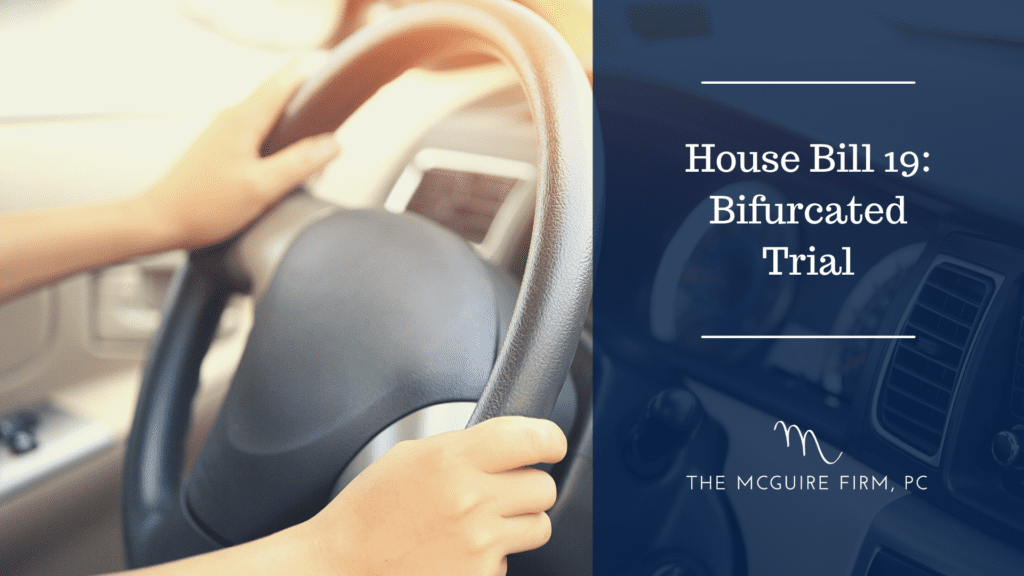 Proposed House Bill 19 can directly impact those who have been injured and are pursuing a lawsuit involving commercial vehicles. I want to take a moment to explain more about why this proposed bill favors trucking companies over injured individuals by describing the bifurcated trial process. (If you missed it, click here for an overview of House Bill 19 and what it means for you.)

Currently, in a case where an injured party is suing for exemplary (more commonly called punitive) damages, the process would have a few clear steps. First, you have a trial. At the conclusion of this trial the jury answers 3 questions:

If the jury unanimously finds the defendant was grossly negligent (question #3), then there’s a second phase. The second phase is why the trial is called “bifurcated” and in this phase, the same jury determines how much to punish the defendant. Think of it like a “guilt/innocence” phase and a sentencing phase like in criminal cases.

Under House Bill 19, if the defendant stipulates to liability (meaning, he walks in, even if it’s for the first time during the whole case, and says “I admit I’m at fault”) then the jury will not hear any facts about the defendant’s egregious acts in the first phase, and instead, phase 1 would simply be about what are called compensatory damages—what is owed to the plaintiff for his injuries.

In phase 2 under HB 19, the jury would hear all the bad stuff about how the at-fault driver was drunk, or on drugs, or didn’t keep logbooks, or should have been fired 4 times already, or whatever. In that second phase, the jury would determine both the issue of gross negligence and how much to punish the defendant.

Okay, so if you’re still with me you may be asking: “Why would a trucking company want this change?” For the following reasons:

The chances of a “big” verdict are significantly lower.

Big verdicts are generally driven by a combination of the injury the plaintiff incurred and by displaying to the jury that the defendant is a bad actor. There exists a general bias against personal injury cases. The trucking companies want the inherent bias against personal injury cases to not be thwarted by finding out actual bad things about the trucking company or its driver.

The purpose of the new bifurcation rule is to avoid informing the jury of the bad liability facts concerning the at-fault commercial driver and his company so that the defendant can appear to be “wearing the white hat” in the trial, and act like they’ve done nothing wrong during phase 1 in an effort to keep damages down. This is for the sole purpose of further limiting the amount of exemplary damages that can be levied against them. In other words, the statutory caps that are already in place on exemplary damages isn’t enough—they want to further hedge their risk by withholding important facts.

Keep in mind, this is only for cases involving commercial vehicles. This bill does not affect other types of cases where a person is sued for gross negligence—it’s a special carve-out for trucking companies.

Want a quick overview of House Bill 19 and how it can impact you? Head over here to our last blog!

Can I get medical treatment if I don’t have health insurance?

END_OF_DOCUMENT_TOKEN_TO_BE_REPLACED

Do I need to hire a lawyer for a car wreck case?

I understand this question. Most people have had to make some insurance claim during the course of their life. It could have been a homeowner’s claim, or you might have needed a new roof after hail damage. For most people, the insurance...

END_OF_DOCUMENT_TOKEN_TO_BE_REPLACED

What if my doctor won’t treat me after my car accident?

END_OF_DOCUMENT_TOKEN_TO_BE_REPLACED

You’ll never pay us a dime unless we win your case, so…

Ask Shane About Your Case—For Free